Consciousness expresses itself through creation.  This world we live in is the Dance of the Creator.  Dancers come and go in the twinkling of the eye but the Dance lives on. On many occasions when I am dancing I have felt touched by something sacred.  In those moments I have felt my spirit soar and become one with everything that exist. I become the Stars and the Moon.  I become the Lover the Beloved. I become the Victor and the Vanquished I become the Master and the Slave I become the Singer and the Song I become the Knower and the Known I keep on dancing then it is the Eternal Dance of Creation,   the Creator and the Creation merge into one wholeness of joy.  I keep on dancing.... and dancing ... and dancing , until there is only the Dance. By Michael Jackson   These words that Michael wrote I found in 1990 while reading his CD cover. I wrote them on a piece of paper and kept them, for never had I read such a clear explanation to how I feel when I dance when I become One with the music and all that is...   Such joy I feel when I dance when I feel so blessed that I can dance, that my body moves effortless to the rhythm with my heart. I bless my legs, my feet my toes, my full being and then I laugh with joy and feel so much love as I rejoice with my body as we enjoy the music and movement. Many a night when alone I turn on the music and I laugh with my body as we enjoy the movement of the love expressed ... even as I write this I take the breath of Love inhaling the joy of remembrance when I danced the dance of Love with myself... moving effortlessly around the room my partner the chairs, the pillow, being the music and the universe, flowing effortlessly, moving hands, hair, head , arms all finding their sound ... and we laugh... yes we laugh for we are in total joy and there is no one there ... yet everyone is there... the Universe is there and we have a party ... ah the music is loud ... yes! The vibration flows through me I breath in this wondrous rhythm Uhm.... Yes!... and the rhythm is gypsy, the rhyme is drums of Africa, the rhythm is Rimsky Korsakov, Gershwin, and more... what ever my heart desires in the moment.... Yes it is movement of the ages ... I revel in and rejoice in that I can move to any music... I am limitless and all is total Joy ...that cannot be measured ... total Love ...  and Gratitude beyond words... And my dear friends and family I just wanted to share with you in words yet the words cannot express the Dance and yes the Music and how it flows through me... and the movement I desire upon hearing it.  For the two go together and Yes there are times when the Music is the wind in the trees, the birds singing, Sunshine and the Clouds... Moon light and Stars  where when my heart feels I lift up my arms and I turn and I dance to the music only my heart can hear and must be expressed ... Yes in Dance ... and I exhale... and breath in Love…

for Love is being expressed fully in the movement that is Joy,

is Prayer of the ages, 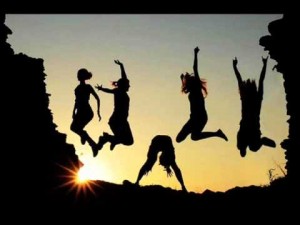 The Dance of Love

Let's Celebrate Life with Love and Spread it around